The Pride of the Fleet 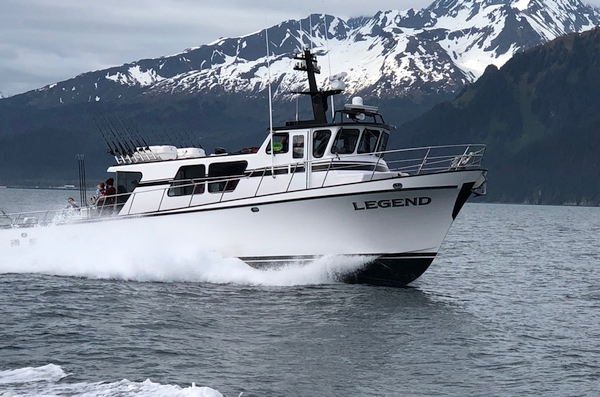 Saltwater Safari Company has spared no expense in our commitment to excellence in providing you with very best Alaska fishing experience. Our vessels are impeccably maintained and will meet and exceed your expectations for safety, comfort and cleanliness.

The 53 foot Legend and 53 foot Legacy, built by Delta Marine Industries, are the pride of the fleet and outfitted with the most serious sport-fisherman in mind. These fast, powerful, long-range fishing machines are powered by twin Caterpillar 660 hp diesel engines and are capable of speeds in excess of 25 knots. They are designed to withstand the inclement conditions that are sometimes associated with the Alaska Gulf Coast. These vessels are inspected by the U.S. Coast Guard annually and have always met or exceeded their stringent requirements. 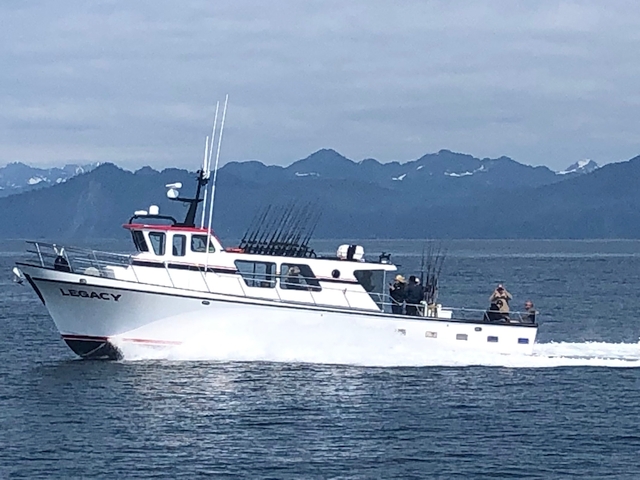 Each boat comes appointed with everything required for a safe and pleasurable trip, including comfortable cabin furnishings, a complete array of sophisticated electronic navigation and communication equipment, state-of-the-art fish finding equipment and all the necessary emergency/survival gear. Legend and Legacy are immaculately clean and strictly maintained.

Renegade is a USCG inspected vessel that can carry 8-10 passengers. She is equipped with the latest in marine electronics, including forward and side-scan sonar.

Renegade is available for full and half day charters including king salmon trolling charters. She is equipped with and hydraulic bow ramp and can also do drop offs on many remote locations along the north gulf coast! 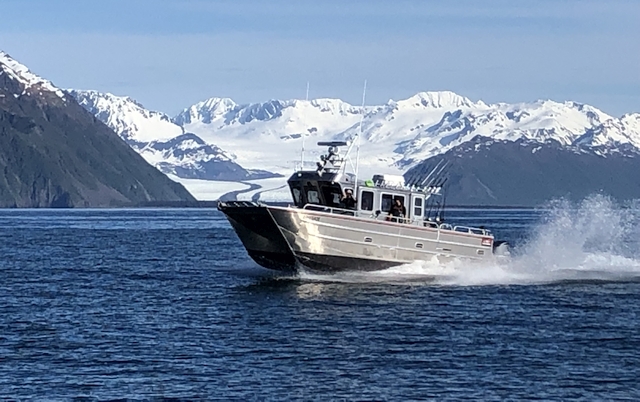 Captain Bob Candopoulos, owner of the Saltwater Safari Company and skipper of the 53 foot Legend is licensed by the U.S. Coast Guard as Master of Vessels up to 100 Gross Tons. Captain Bob has a wealth of experience gained through his 37 years of chartering out of Seward. He was the first Seward fishing guide to realize and explore the potential of the long-range fishing possibilities that areas like Montague Island and Middleton Island have to offer and has many historical catches to his credit. His pioneering efforts opened the door to help make Seward, Alaska one of the top sport-fishing destinations in the world.

Captain Bob is heralded as one of the most sought after fishing guides in Alaska and has been featured on numerous outdoor television programs, and in numerous articles and publications throughout his extensive guiding career. He is also the founder of the Armed Services Combat Fishing Tournament, an annual event that hosts over 200 members of the U.S. Armed Services to a day of fishing each season.
Going into its 11th season in 2017, this event is the largest military appreciation fishing tournament in the United States and one which Capt. Bob considers to be his finest achievement!

Captain Bob is also consider the pioneer of Alaska's Salmon Shark fishery. He has guided over 1,100 salmon shark landings to his credit and has worked extensively with the Alaska Department of Fish and Game, the Virginia Institute of Marine Science and Scripps Oceanographic Institute, to better understand the migratory patterns and physiology of this northern cousin to the Great White Shark.

Captain Bob has spent more time fishing and exploring this area than any other fishing guide in Alaska. He has made guiding anglers his life career and enjoys his time on the water sharing his many stories with his guests. If a truly experienced guide is what you’re looking for, look no further, because you won’t find one.

Captain Steve Babinec, co-owner of Saltwater Safari company and skipper of the 53 foot Legacy is a life-long Alaskan. Captain Steve also is credited with his efforts to establish Seward as a top fishing destination. He is an avid fisherman who is licensed by the United States Coast Guard as Master of Vessels up to 100 Gross Tons. With over 30 years of boating and fishing experience in Alaska waters Captain Steve has proven himself to be an innovator of halibut fishing technique and terminal tackle design. His knowledge of the tides and currents of this region has made him a consistent top producer of some of the largest catches to hit the Seward docks.

Captain Steve has a competitive drive that makes him go further and fish harder than most area captains. He is credited with constantly pioneering new halibut hotspots and techniques.

He specializes in hunting for big halibut and is also regarded as the best combo fisherman in the harbor, oftentimes limiting out his entire boat with halibut, salmon, lingcod and rockfish - all in a single day. The 2017 will mark Capt. Steve’s 27th year as a Seward fishing guide. Capt. Bob Savino started working for Saltwater Safari Company as a deckhand when he was 15 years old. The nephew of Capt. Bob Candopoulos, he has spent countless hours working on the decks of the Legend and Legacy learning everything he could about boating, fishing and the local knowledge of the region and fishery.

At the young age of 22 he received his United States Coast Guard License as Master of Vessels up to 100 Gross Tons and began running both the Legend and Legacy for the next 4 seasons. During the 2016 season he took command of the new, high-speed, 36’ Renegade and has been bringing in record catches ever since.

He is a fun loving and easy-going guy, but is known to get very excited and intense when the bite is hot! He especially enjoys targeting large halibut and trolling for king salmon.


In the off-season, Capt. Savino spends his winters in central Florida where he is a fresh water guide in the everglades and enjoys running airboats!

We Specialize in Corporate Retreats

Call for rates. Rates do not include 11% KPB sales/bed tax.