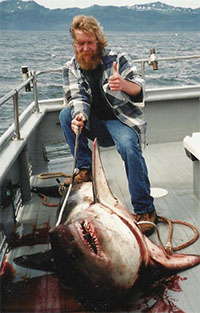 The Salmon Shark is a first cousin to the Great White and Mako shark. Each spring their migratory route brings them to the North Gulf Coast of Alaska where they spend their summer following the returning migrations of herring and salmon.

Alaska Salmon Sharks are big, fast and guarantee you a fight of a lifetime. Averaging between 400 - 500 pounds, Salmon Sharks are capable of high-speed runs and acrobatic leaps that will impress even the most experienced big game fisherman. Battles ranging from one to four hours are commonplace. Salmon Sharks in excess of 800 pounds are caught each season by Saltwater Safari Company anglers. If you are ready for a challenge, this trip is for you.

No one in Alaska has been more involved in the fishery and study of the Salmon Shark than Captain Bob Candopoulos, founder of Saltwater Safari Company and pioneer of Alaska's newest shark fishery. With well over 1,100 landings to his credit, he has become a local authority on fishing for Salmon Sharks. Captain Bob has studied the Salmon Shark for the past 25 years while guiding out of Seward and has finding and landing these great fish down to a science. In a word, nobody does it better.

We Specialize in Corporate Retreats

Call for rates. Rates do not include 11% KPB sales/bed tax.